This committee promotes the activities of extern parties, for example the other Dutch student tennis associations. They also visit the extern activities a lot.

Besides the committee will organise big events outside G.T.C. Walhalla and activities together with other associations.
An example would be the weekend to Paris including visiting Rolland Garros. 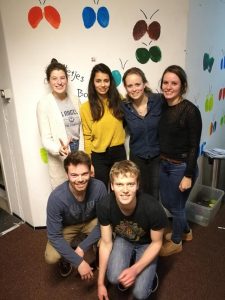 If you are interested in joining the externcie, please fill in the form here

External tournaments are tournaments at other tennis associations throughout the Netherlands. It’s a combination of playing tennis, watching tennis, relaxing and partying. Everyone can play tennis at his or her own level. There’s a difference between an external open tournament and an external tennis weekend. With an external open tournament, the tournament is focussed on students but non-students can also participate. This type of tournament lasts throughout the week and counts for your rating. It is however possible to join in from Friday and the weekend so you can follow you courses during the week. An external tennis weekend is just a weekend and only students can participate. This weekend doesn’t count for your rating. For both the external open tournament and for the external weekend it’s possible to sign up for one or two divisions; singles, doubles and mixed doubles. Some external weekends only allow you to participate in doubles or mixed doubles, so no singles. If you choose to participate in two divisions then you should be available to play by Friday the latest. If you choose to participate in one division, it’s possible to mark Friday as an obstruction so your first match will be on Saturday. Besides the matches being organized by the external tennis association, there are more activities that you can attend to such as beer pong tournaments. There’s also the option to eat your dinner there on Friday and/or Saturday and sleep there overnight. You usually sleep in a sports hall, which is arranged by the organization of the tournament or in a tent on a lawn.

External tournaments are the perfect way to meet new people all over the country and build new friendships with people that have the same interest: tennis. There are people who are really fanatical during the match but also up for a fun game of beer pong. So far, I’ve been to three external tournaments namely; the NSK (National Student Championships), the external tournament of Qravel in Leiden and I’ve been to EXTC (the external tennis weekend of the Uithof in Utrecht). I was amazed by the amount of students playing tennis at the NSK, I’ve never seen so many students playing tennis at the same place. I’ve witnessed some amazing matches of high level and the parties were great. During the NSK, I managed to get lost in Rotterdam as you had to travel between the party location, sleeping location and tennis association but fortunately I met another guy and we found our way back eventually. During the Qravel tournament, you could join a boat tour with drinks through the canals in Leiden, which was really nice and pretty. At the EXTC tournament I played a match whilst being half drunk with Axel, which went surprisingly well actually. Furthermore, almost every external tournament has a beer cantus in which a lot of beer is being consumed. Most of the times, this cantus is on the Saturday, which is great timing because afterwards there’s a party. In short, if you want an experience you’ll never forget in which playing tennis, meeting new people and partying are combined, don’t hesitate to sign up for an external open tournament or external weekend and enjoy for yourself!

Floris Dautzenberg, member of the ExternCie

The racketevening is a fun way to play some tennis, meet fellow members and grab a drink with eachother after playing (you can also come by when you won’t play tennis). You play doubles for[...]
Feb
5
Sun
all-day SST Wageningen
SST Wageningen
Feb 5 all-day 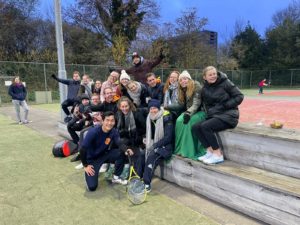 The racketevening is a fun way to play some tennis, meet fellow members and grab a drink with eachother after playing (you can also come by when you won’t play tennis). You play doubles for[...]
View Calendar
Add